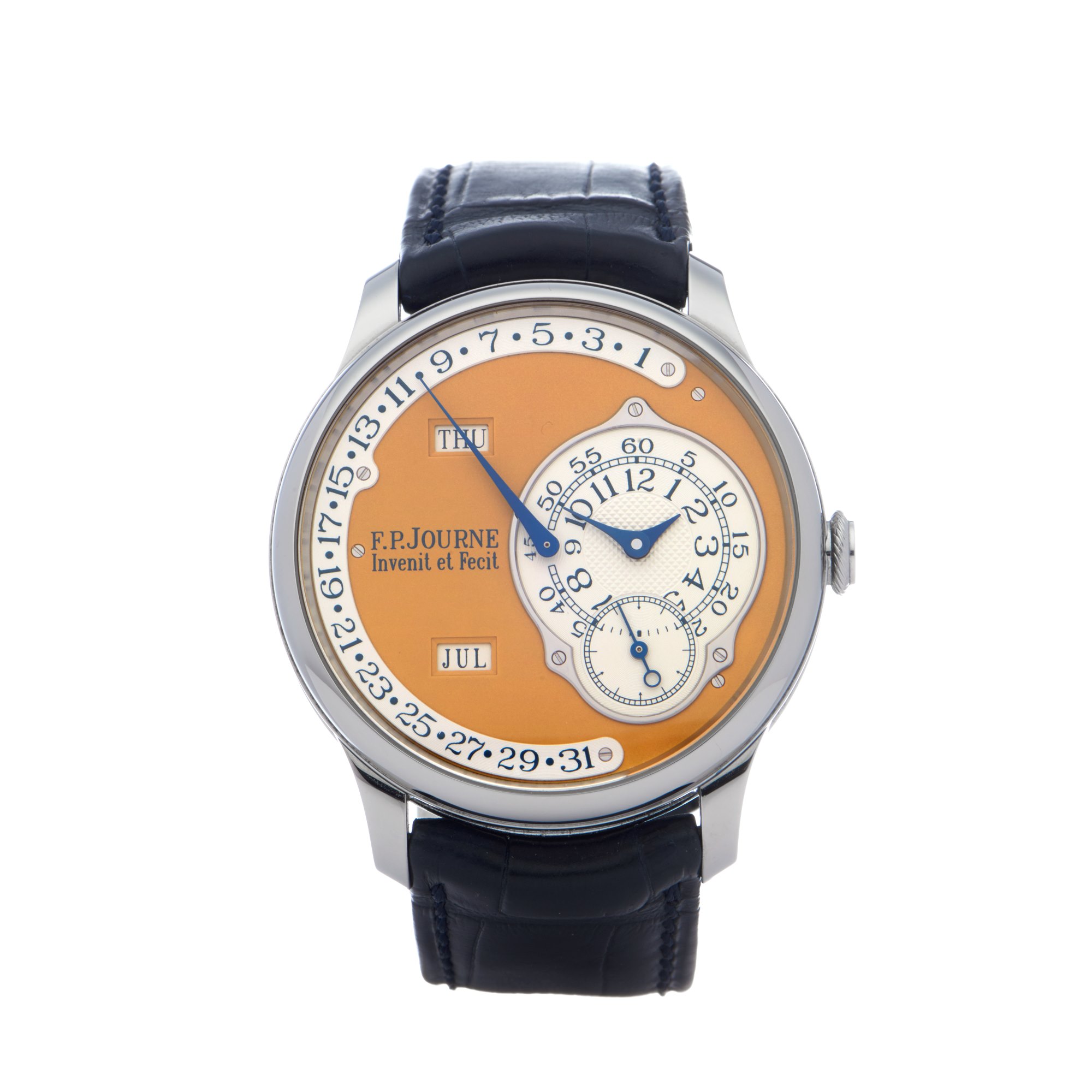 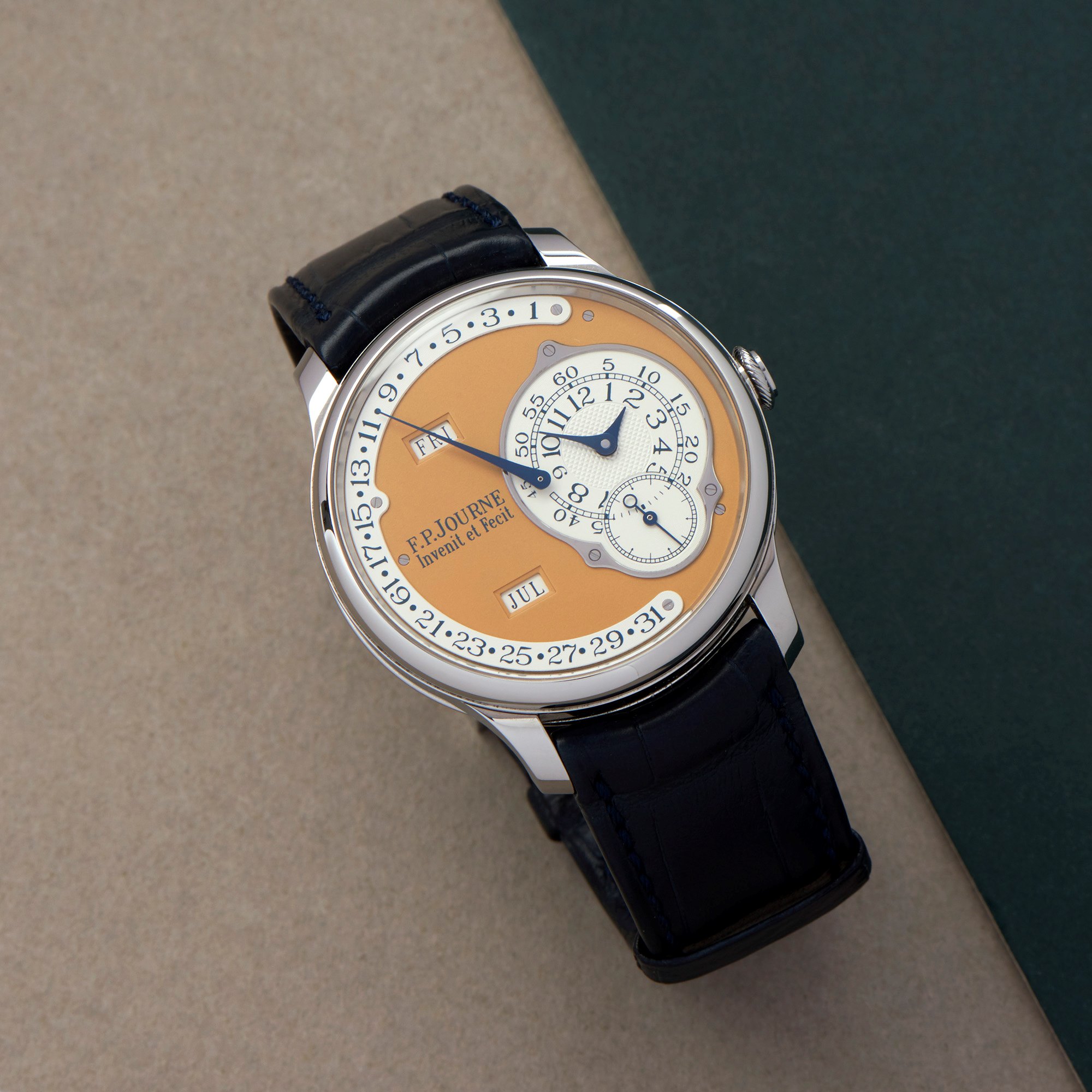 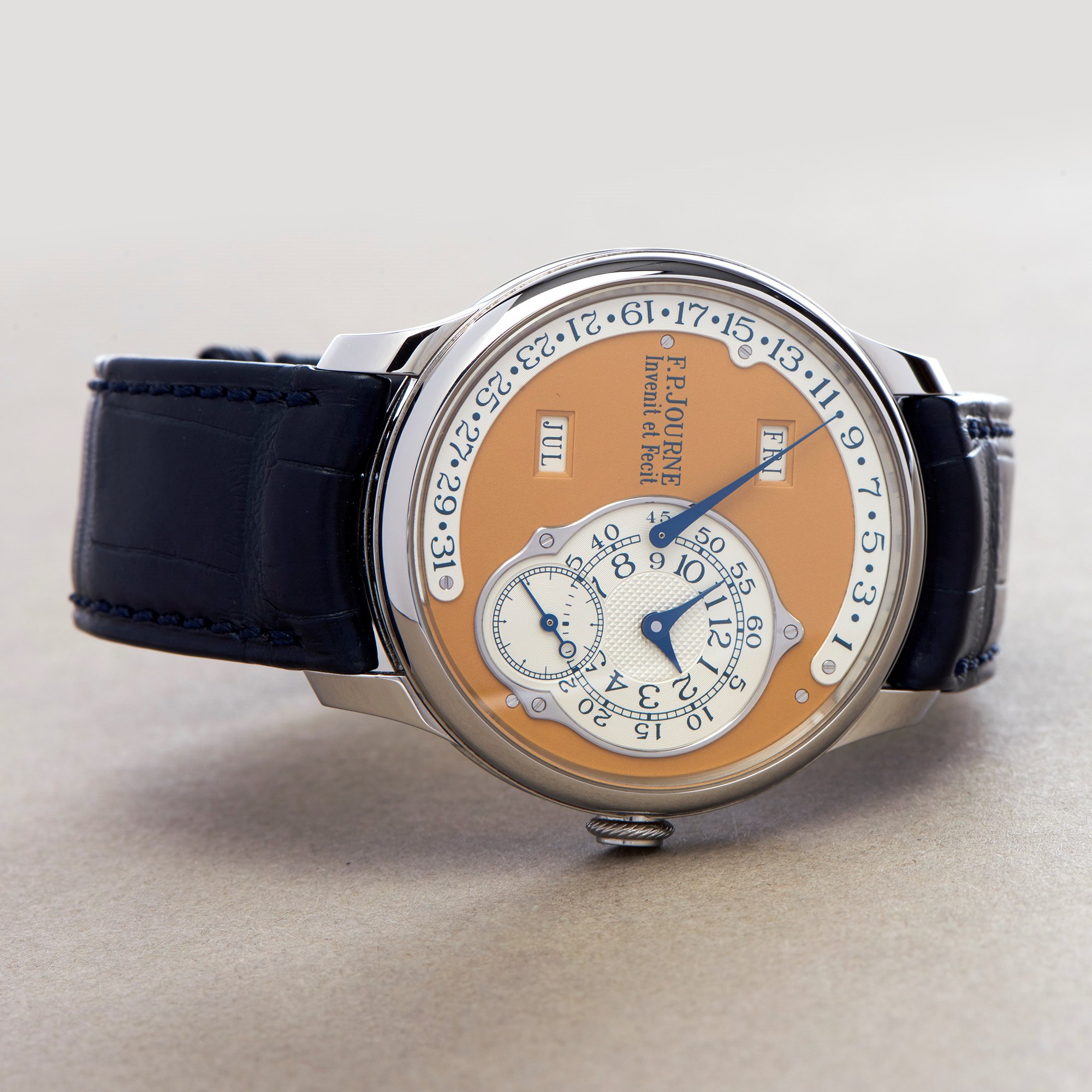 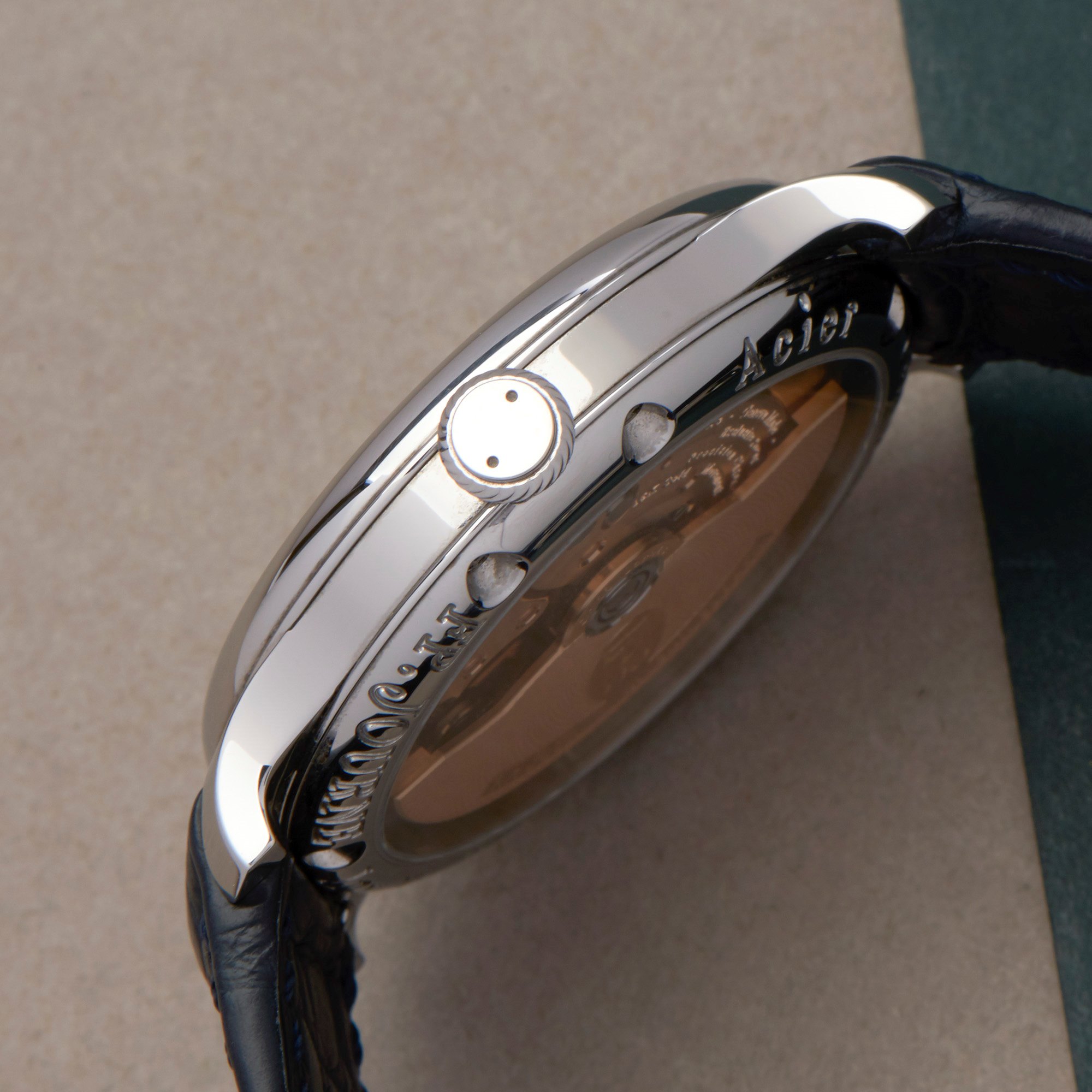 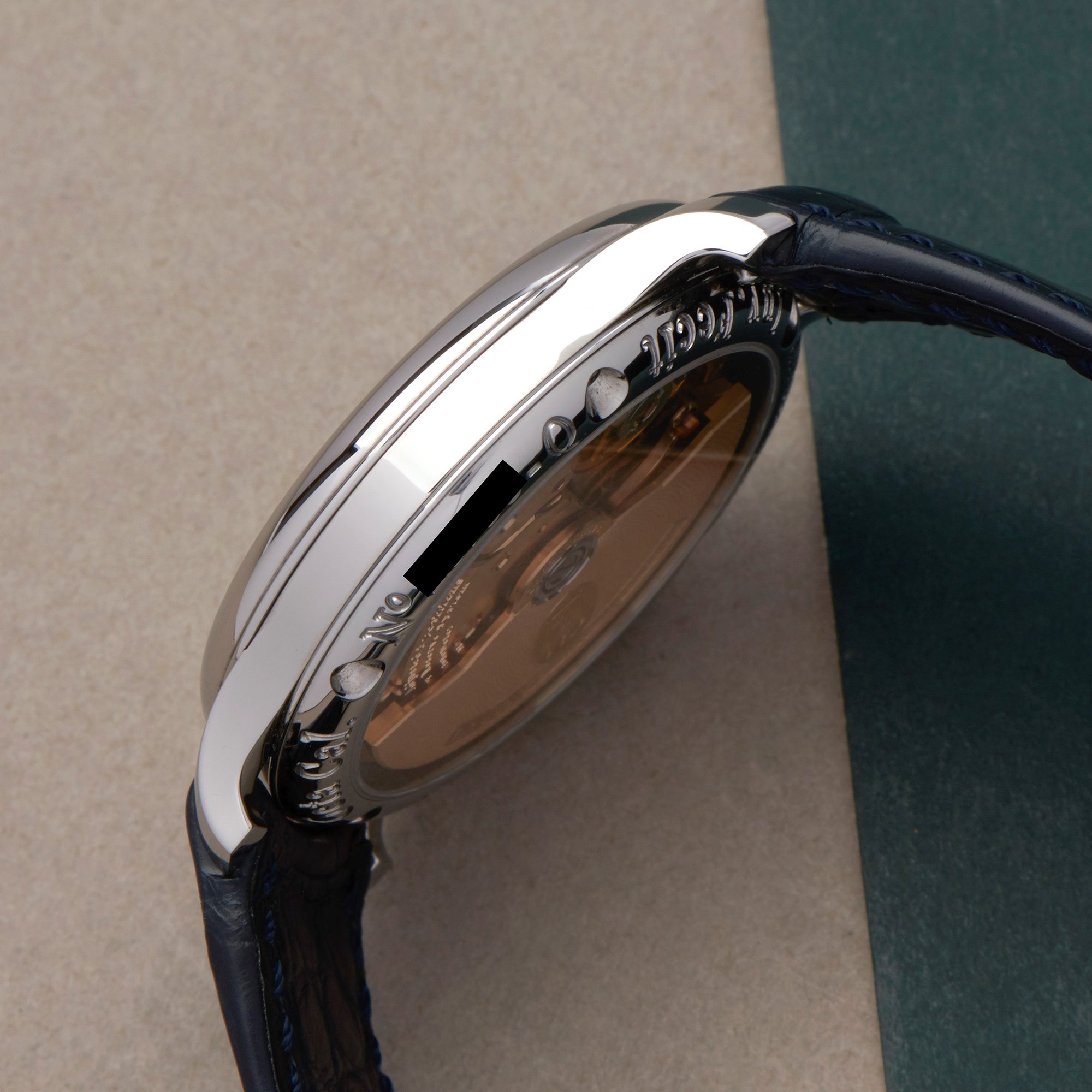 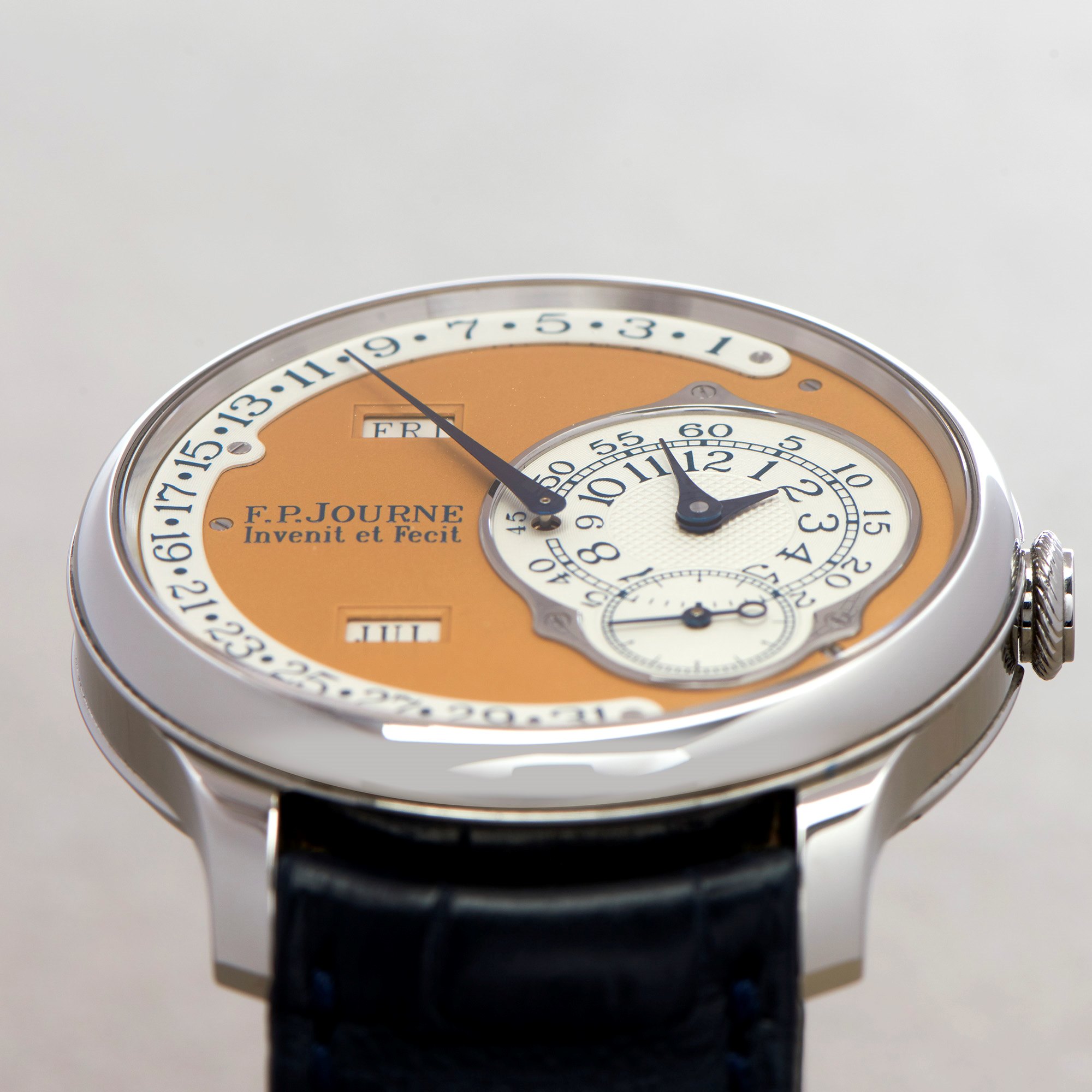 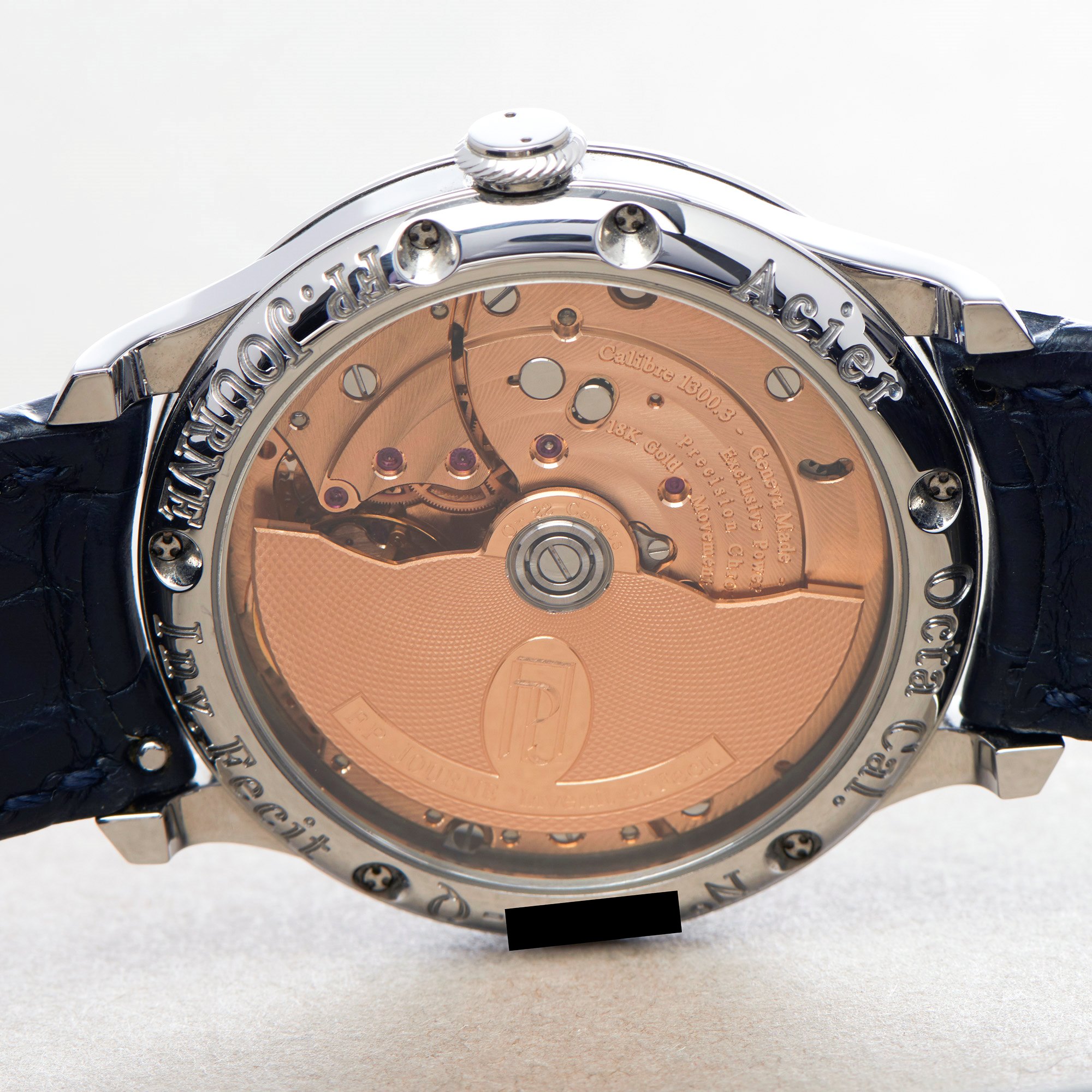 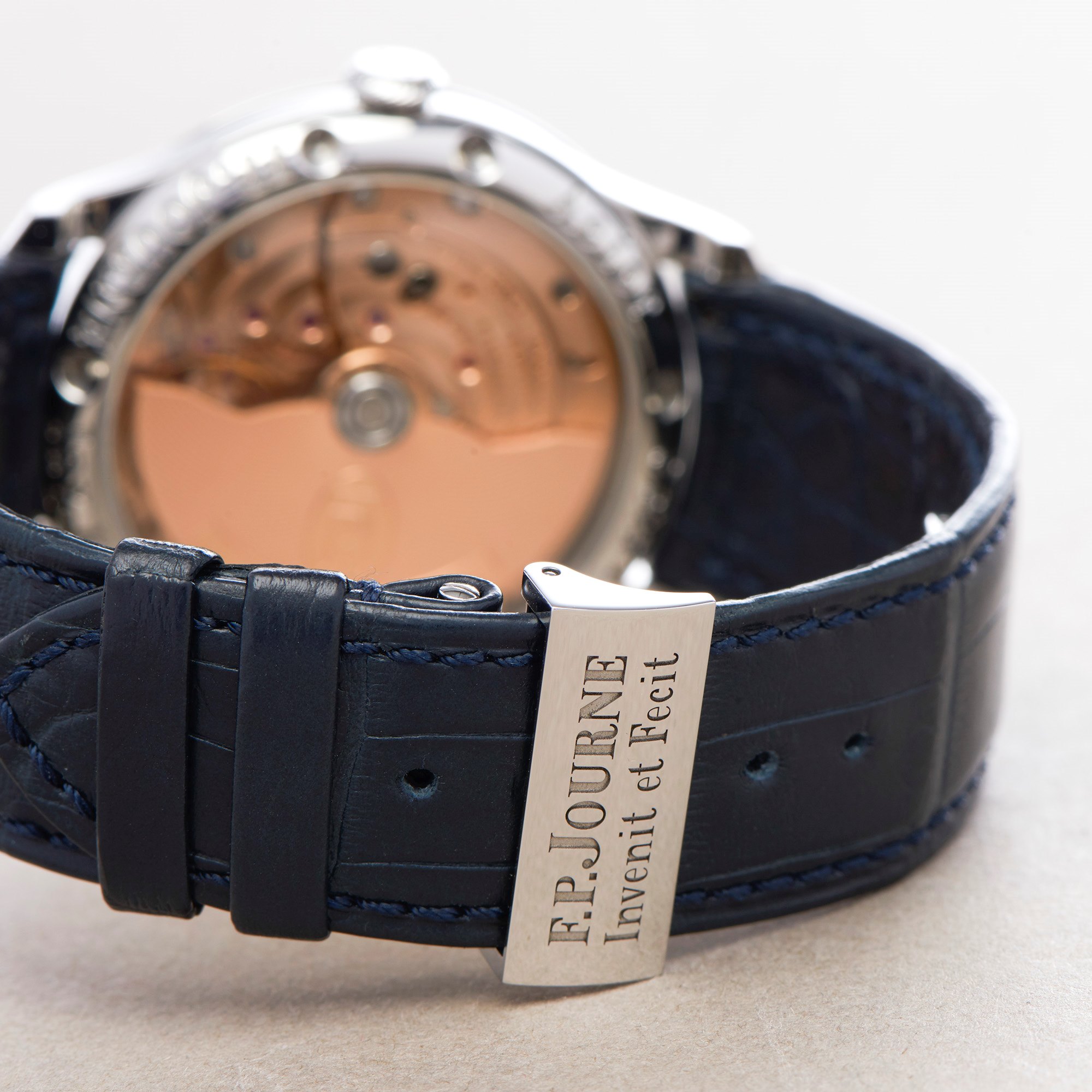 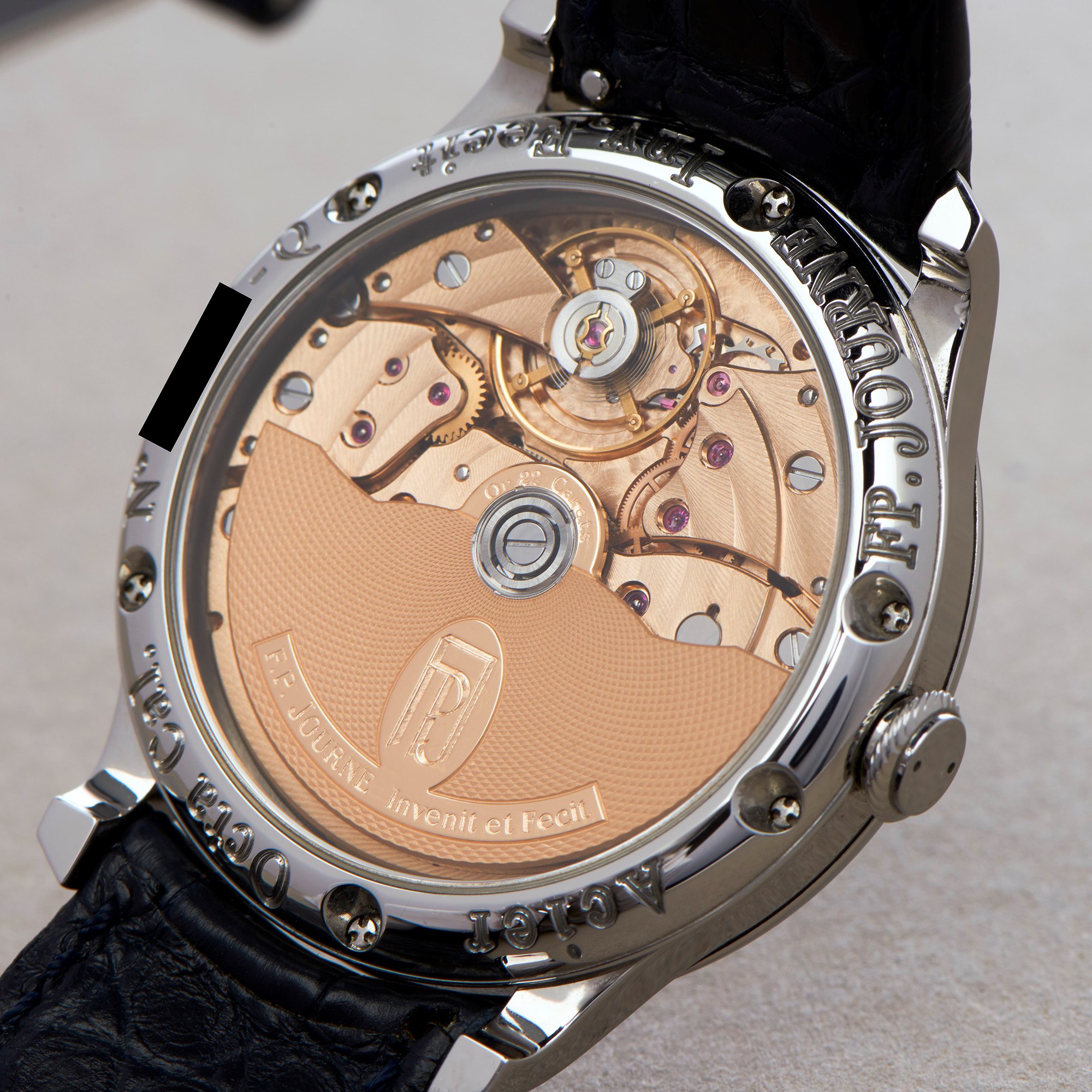 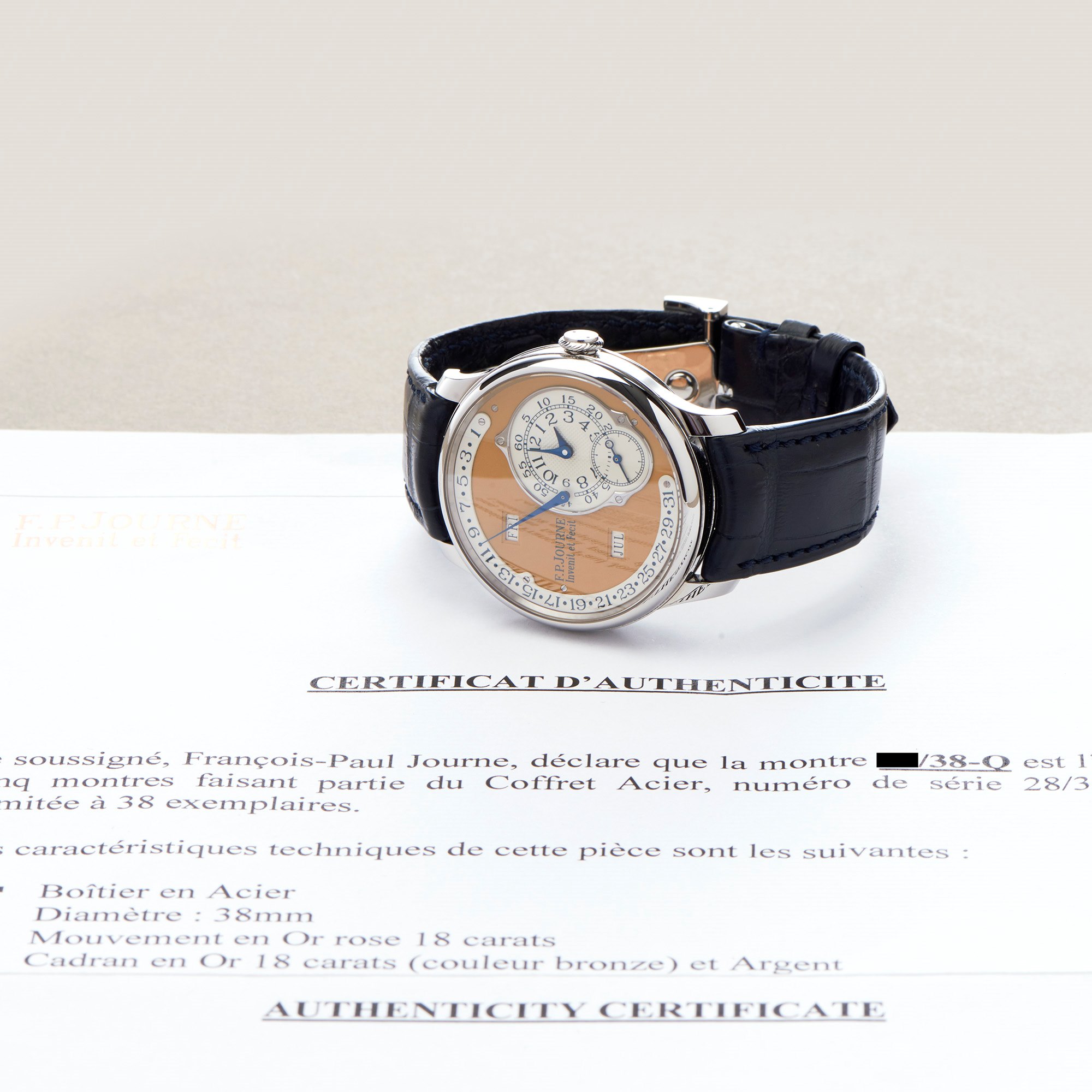 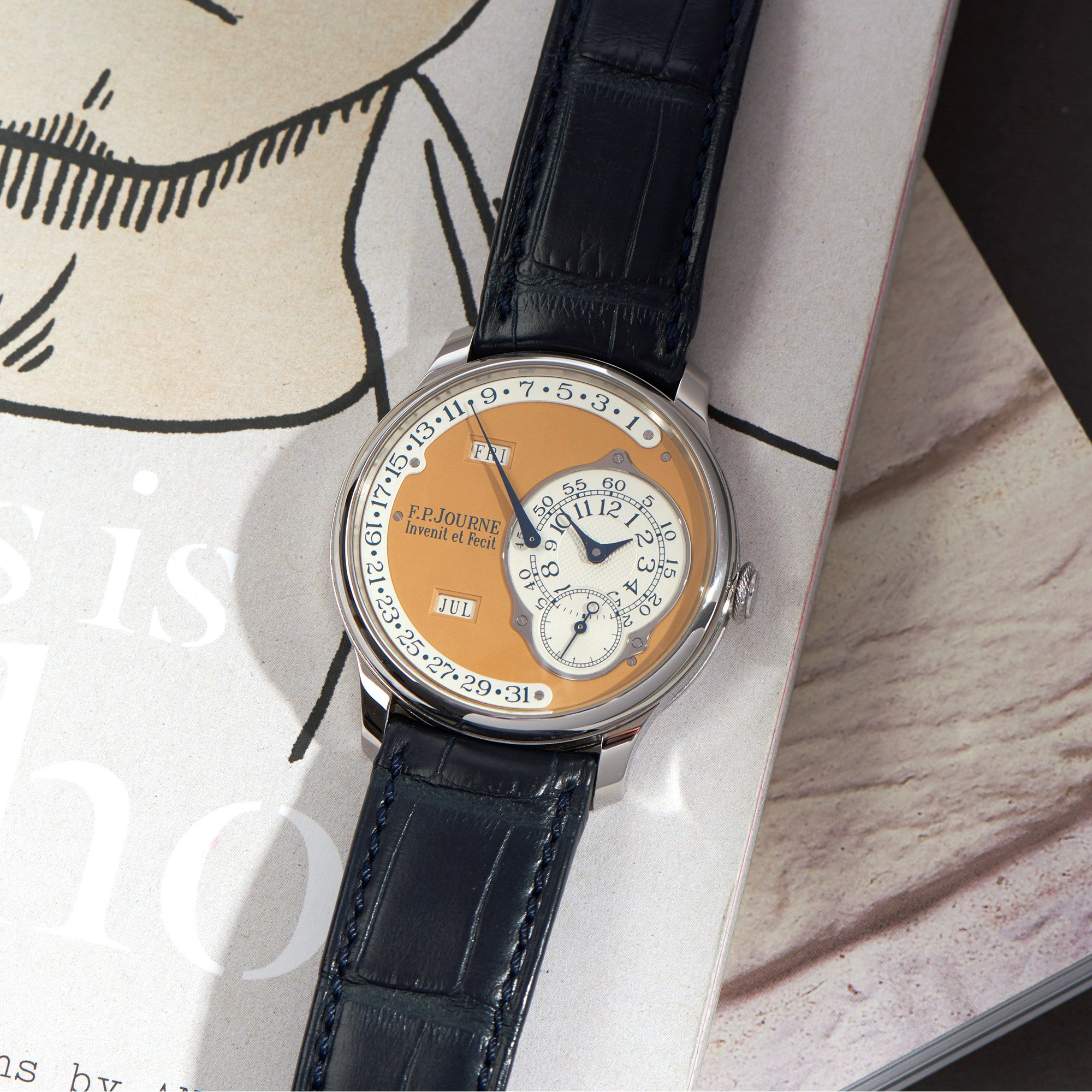 We are delighted to offer this true collectors piece in the F.P. Journe Octa Calendrier in stainless-steel, part of a limited ‘Steel Set’ series of five watches.

F.P. Journe is a brand which over recent years has cemented its reputation as one of the best independent watchmakers in the industry. Nothing cements this more by the numerous awards F.P. Journe has won at the GPHG (Grand Prix d’Horlogerie de Genève), the most prestigious award ceremony in the watch industry. One of the aforementioned awards won was for an Octa Calendrier in 2002. The watch was so highly regarded F.P. Journe was awarded the ‘Special Jury Prize’, one of the most highly regarded in the event.

F.P. Journe was founded in 1999, named after the founder, François-Paul Journe. The brand aimed to bring classical design, heritage watchmaking techniques and modern technology into one, which can be seen in watches such as the Octa Calendrier we are presenting. An example of this design knowhow and technical ability within the Octa Calendrier is the positioning of the Hours, Minutes and seconds on the dial. This was originally believed to be an idea by F.P. Journe himself so that he could discreetly peer at the time while the watch was sitting under a shirt cuff, hence the positioning of the time on the right-hand side of the dial. Examples of this positioning can be seen in very early examples of his watches, including his very first. Initially this design seems like a simple idea that would be simple to execute, however it is much more complex than it seems. F.P. Journe had to develop an entirely in house movement in order to do this, designing a bespoke geartrain layout in the process.

Moving onto the Octa Calendrier we are presenting; the watch is part of the 38mm ‘Steel Set’ made to commemorate the prolific makers very first watch, a 38mm tourbillion. 38mm was a very large case size at the time and therefore the watch did not get the best reception when it was first presented at Baselword. Times soon changed however and 38mm is now considered a perfect size for everyday wear. This 5-piece set of watches included the Octa Calendrier we are offering (the company’s automatic best seller since its introduction in 2003), a Chronomètre à Résonance in its original configuration, a Tourbillon Souverain with a rose gold movement (never previously made by F.P. Journe with the rose god movement), an Octa Automatique (the first automatic watch made by F.P. Journe) and a Chronomètre Souverain (included in the set because of its aesthetic purity). All the watches listed have a stainless-steel case, which is 38mm, and the same solid gold dial, thus making this a matching set.

The F.P. Journe Octa Calendrier 38mm in stainless steel limited to 38 pieces has a solid gold dial, along with a solid rose gold movement. If you turn the watch over and peer into the sapphire caseback of the watch, you are able to see this solid rose gold calibre 1300.3 in all its glory, with perfectly bevelled edges, perlage and many more traditional finishing techniques being displayed.

The watch is accompanied by its original F.P. Journe Authenticity Certificate, confirming the watch is number 2* and limited to 38 pieces and is part of the ‘Steel Set’, and Xupes Presentation Boxes.

The overall condition of this F.P. Journe Octa Calendrier is Excellent & must have been treasured by its previous owner. The stunning stainless-steel case retains all its beautiful factory finishing & has never been polished. The contrasting Blue alligator leather strap is also in excellent condition, showing minimal use, along with the signed stainless-steel depolyant buckle.

In summary this is a truly beautiful limited edition F.P. Journe Calendrier, coming from one of the worlds finest independent watch brands, with a fascinating story, making this this a rare opportunity to acquire a piece of horological history. 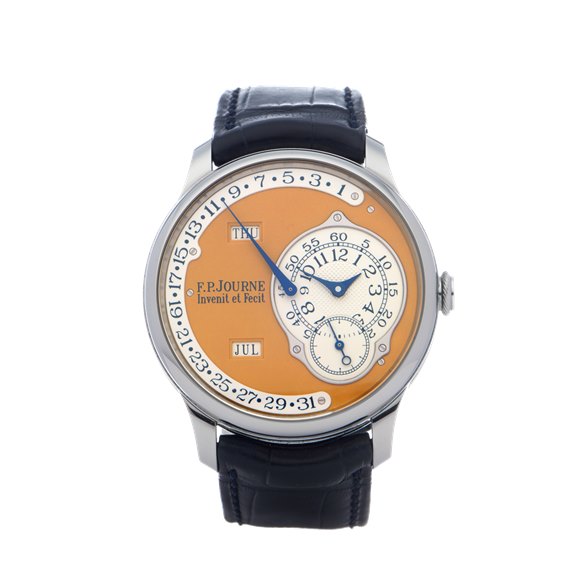 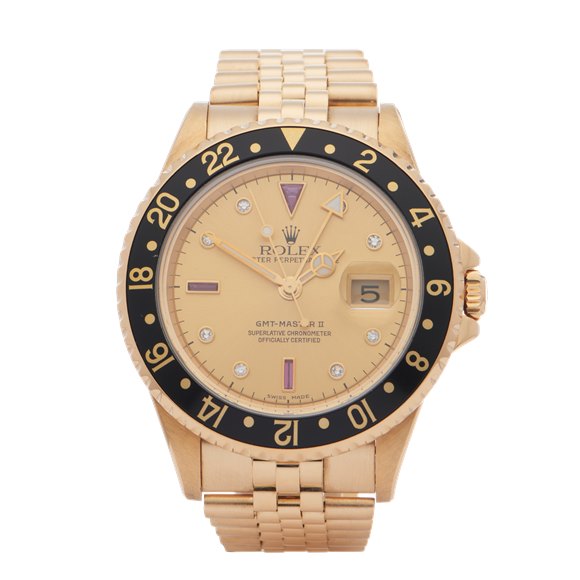 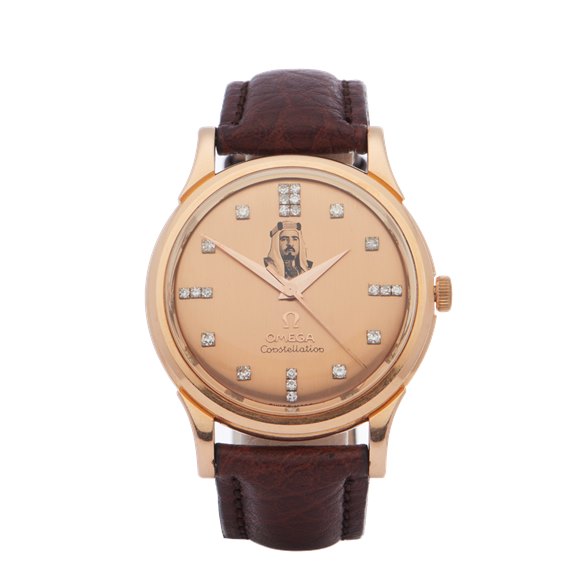